When people get it older, character traits that have been present throughout their life, including anger, abusive language and general impatience—tend to become magnified. Aging is a difficult and unsettling process for many elderly people, especially if they feel that their friends, family and care-home employees don’t understand their emotional turmoil or are insensitive to the psychological stress that it puts them under. Below are some guidelines for dealing with angry, elderly family members. 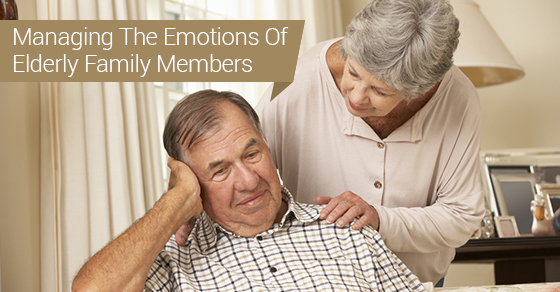 Handling anger. The best way to rationalize and deal with the anger experienced by elderly family members is to not take it personally. Pain and disease cloud judgment and we must approach their anger with empathy and a willingness to help.

Cursing and abusive language. Verbal abuse and unpleasant language can make handling and caring for elderly family members complicated, especially where children are involved. One way to mitigate swearing is to distract elderly family members when you feel like their language is becoming inappropriate or unreasonable. This could include conversational or physical distractions.

Paranoia and hallucinations. Often times, in an attempt to cope with feelings of incompetency or disempowerment, the elderly will project their feelings onto family members. This can manifest as paranoia, and may be further complicated by medications and drugs which exacerbate this tendency by causing auditory and visual hallucinations. It can be brought on by terminal mental illness such as Alzheimer’s and Dementia and create further turmoil within the family as relationships become adversarial.

Physical and emotional abuse. The best way to engage elderly family members who are prone to becoming emotionally and physically abusive is to open the lines of communication. Preempt further abuse by talking to elderly family members about how the abuse makes you feel. If the behaviour becomes incorrigible, you may need to call on additional, outside support. Long-term care facilities may be sought in order to alleviate your own emotional stress and spread the workload out among multiple people.

Entering old age and coming to the end of one’s life can be a traumatic, confusing and generally stressful experience for many. Elderly people need the support of their families and community at large, but it does not mean that they are not subject to the same standards of behaviour and expectations surrounding the humane treatment of others that the rest of us are. If you have an elderly family member who has become aggressive, abusive or is demonstrating signs of paranoia, incorporate the above knowledge into your interaction with them and help relieve their stress and provide yourself with peace of mind.