Looking At The Difference Between Dementia And Alzheimer’s Disease

The terms dementia and Alzheimer’s are used interchangeably by many, but they do not mean the same thing. It’s confusing because the symptoms of both many times overlap. It is important to understand the differences between the two in order to manage this special area of senior care and treat both effectively. 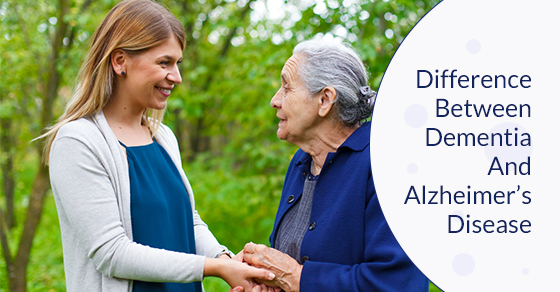 The most important difference is that dementia is a syndrome or a set of symptoms, whereas Alzheimer’s is a disease.

The most common cause of dementia is Alzheimer’s disease.

Let’s take a look at what these two senior care conditions are and how they are different.

Dementia is actually a syndrome or a set of symptoms. These symptoms can be caused by other issues or some specific disease. There are in fact 10 different types of dementia, a common one being vascular dementia. In this particular type of dementia changes in the brain are caused by a stroke or heart attack where the brain is deprived of oxygen for a period of time.

Symptoms and Progression of Dementia

Although there are over 47 million people suffering with dementia, it is not a normal part of aging. It is progressive in nature, and usually occurs because brain cells are damaged through some event or disease, like a stroke or Parkinson’s disease.

Unfortunately there is no cure for dementia and no way to stop the progression.

The major difference between dementia and Alzheimer’s is that the latter is a disease of the brain. Brain cells deteriorate and lose their connections.  It is the most common form of dementia. Strokes, high blood pressure and high cholesterol are NOT related to Alzheimer’s.

Early symptoms include memory problems like forgetting names and events, depression, apathy, and poor judgement. Read about other symptoms.

In the later stages, the patient is not mobile and has difficulty speaking and swallowing, requiring specific senior care.

Once the cause of the dementia is determined, there are ways to treat the symptoms, but the condition is not reversible. For example, vascular dementia would be treated with drugs plus lifestyle changes to prevent another stroke.

With Alzheimer’s there are treatments and drugs to help manage all the symptoms, but it remains a terminal illness.

With any type of dementia, your loved one needs care, either at home or possibly in a facility designed to treat Alzheimer’s or dementia patients. The senior care needed for these issues requires caregivers with compassion, understanding and knowledge.

You will find no better care in Toronto than from the experienced caregivers at C-Care Health Services. Let us help you manage the emotional trauma and provide support for you and your loved one. Contact us today.