Home » Our Blog » How Stephen Hawking Outlived ALS By 55 Years

Astrophysicists were fascinated by Stephen Hawking, while medical experts were astounded by the 55 years he lived with ALS. The famed physicist was considered a miracle to pass away at the age of 76. Nobody has been found to have lived with the disease for that long. 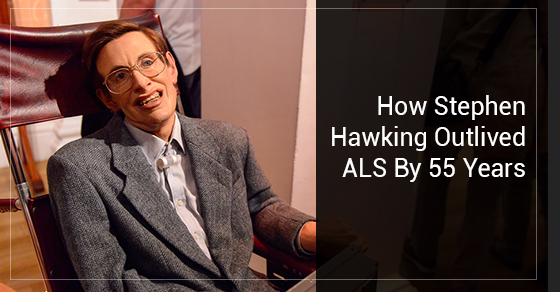 Amyotrophic lateral sclerosis is referred to as Lou Gehrig’s disease, ALS and motor neuron disease. Many die just a few months after the diagnosis. The chance of surviving more than a decade is only ten percent. Some medical experts believe Hawking’s long life can be attributed to the development of his disease at an early stage in life. There is no medical evidence to back this theory besides that a younger body can cope with disease better. The average age to be diagnosed with Lou Gehrig’s disease is between forty and seventy.

The youth theory was considered by British neurologists in the British Medical Journal. They found younger patients survive the disease better and for a longer period of time. The journal stated the chances of an individual in their fifties or sixties surviving for approximately four years to be fifty percent. The odds increase, the younger the patient is, though there is no known reason behind this. The older the individual, the faster the progression of the disease. For now, there is only speculation as to why some survive longer than others.

Stephen Hawking was a cosmologist, a theoretical physicist and authored A Brief History of Time. In 1974, he discovered the black hole thermal radiation. He is considered as one of the most important physicist of the century. Professor Hawking was completely paralyzed due to a motor neuron disease. On March 6th, 2017, he delivered a keynote speech and received London’s Honorary Freedom of the City. This is the highest award recognition bestowed by the city of London, presented for his outstanding contributions to cosmology and theoretical physics.

The lifetime of an individual diagnosed with a motor neuron disease can be extended with quality care. This includes assistance with eating and breathing. According to the British Medical Journal, Hawking received nursing care 24 hours a day. The expenses were covered by grants. Stephen Hawking led a unique life and was an inspiration for everyone associated with the disease. He showed how despite the disease, he rose to professional success and had a loving family. His wife Jane was there to provide all the necessary help; he also had his children whose help he was grateful for, as well as many other individuals and organizations in his life. He believes it was sheer luck that his condition progressed as slowly as it did. This was a powerful statement to show that nobody should ever lose hope.